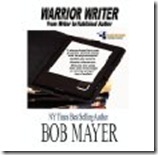 I picked up Warrior Writer by Bob Mayer shortly after the 2010 PNWA Conference where Bob Mayer did a full day workshop on writing.  I was doing a lot of volunteer work that day, so I didn’t get to see his whole presentation.  I bought the book instead.

These days, there is a lot more to writing than just writing.  Writers have to be more cognizant of marketing themselves and creating a career plan than ever before.  With the winds of change just a blowing in the publishing world, the onus is on the writer to make themselves successful.  The writing still has to be good, but lots of good writers aren’t getting published because they are afraid of taking control of their career.  The days of a publishing house supporting a new writer are gone (if they ever existed).  Publishers will support writers with a good track record, but it is up to the author to generate that history for themselves.

Mayer has written a lot of books, done a lot of speaking, and lived a very interesting life.  He’s a graduate of West Point and a former member of the Army Special Forces.  His approach to writing is to treat his career like a Spec Ops mission plan, and that’s what he talks about in this book.  I suppose, with my record as a software developer, I could write a book on writing based on all the lessons I’ve learned working on major software projects.  I do use many of the same techniques in writing that I do in creating software.  I just never thought to write them down and turn them into a book.

Unfortunately, this book seems more like a string of wandering blog articles than an organized work of non-fiction.  The irony of me pointing that out in a blog entry is not lost on me.  The formatting feels unprofessional, there are typos everywhere, and the paragraphs wander to the point that the first sentences often have nothing to do with the last.  Not just a logical progression, but  a completely different topic that makes you jump back and wonder what key word you missed.

The worst issue I have is that in some sections of the book, Mayer documents the responses he had to questions he was asked while giving his talk.  That is not a bad thing in itself.  What is completely odd, and downright annoying, is that he never shows us what the question was.  It’s like he just wrote down the transcript of what he said, dropped it into the end of a chapter, and called it valuable.  I’ve never seen this approach before.  It made for a very poor reading experience.

Mayer does make some good points and laces the book with interesting anecdotes from his Spec Ops days and his research.  My favorite section was the discussion of The Imposter Syndrome, which I have clearly suffered from for most of my life.  While this has very little to do with my writing, it is applicable to my work in software, and has led to some revealing discussions with my coworkers.

Overall though, the flaws in the presentation and in the writing hide much of the value of the book.  You may get some lessons out of it, but if you haven’t read a lot of other books on writing, read The First Five Pages by Noah Lukeman first.  Hopefully Mayer will go back and do another edit on this one an clean it up.  Then maybe I could recommend it.