Book Review: My Side of the Mountain by Jean Craighead George 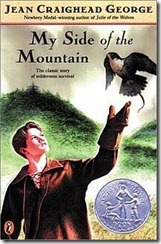 One of the great pleasures of my childhood were my frequent trips to my hometown library. Now that my children are old enough to be reading on their own, I find myself back at my local library every few weeks with them. And since I’m there primarily looking for books for kids, I often come across books I read as a child, like Encyclopedia Brown and the Hardy Boys. Sometimes I come across books I’ve heard about but never read. The urge to pick them up and bring them home for myself instead of the kids is too strong to ignore.

Last Saturday, I stumbled across My Side of the Mountain by Jean Craighead George, recommended to me by Jason Black a year or so ago when we were discussing his feedback on The Forgotten Road. My Side of the Mountain was written in 1959 as the Cold War grew colder, but before the world became such a dangerous place for kids. It’s a wonderful old story, written with an innocence that no longer exists in modern society.

Sam Gribley, a teenage boy from New York City leaves the crowds of the big town for a more independent life in the Catskill Mountains where his grandfather had once tried to start a farm. Sam builds a shelter in a tree, trains a falcon and tries to survive in a world completely foreign to him. Along the way he discovers that this foreign world may be more home to him than he ever would have guessed.

I wish I had found this story when I was a kid. I can guarantee my copy would have been dog-eared from constant re-reading. It’s a perfect book for the 8-11 year old boy who dreams of a life of adventure. I would have run off to the bush on our farm and tried to find the edible plants he talks about. I would have tried to make the tools he did. I would have tried to make shelter the way he did. Halfway through the book this time, as a forty year old adult, I wanted to try it all, even though I have pretty good, modern camping gear I rarely ever use.

My Side of the Mountain is a simple story. Throw out your expectations of the complexities of modern plots, and forget how impractical and frightening this story would be in today’s world. Just sit back and appreciate this boy’s story – written for boys of a different generation, but still a perfect story for a rainy or snowy Sunday afternoon. I know I’ll be giving it to my kids as soon I am am sure they know better than to run off to the woods on their own.

← Book Review: His Salvation by Michelle Bellon
Talking About My Generation →

Category: Book Reviews      Tags: Jean Craighead George, My Side of the Moutain