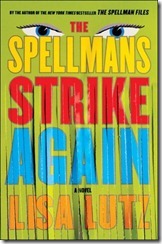 The Spellmans Strike Again is the fourth book in the Spellman Series by Lisa Lutz. If you haven’t read the first three, I recommend doing so, probably before you read this one.

The Spellmans are a family of private investigators in San Francisco. Or rather, the parents, Olivia and Albert are retiring as private investigators, and handing the business over to one of their daughters – Isabelle. Izzy has been a bit of trouble maker in the past. She might say that trouble follows her around, but she doesn’t stop it from keeping close tabs on her.

Take, for instance, her next ex-boyfriend (#12), Connor, an Irish bartender whose best attribute is that Izzy gets to run up a bar tab at Connor’s establishment.

Then there is her little sister, Rae, who while just about to graduate from high school with excellent grades, has a proclivity for also getting into trouble, though it’s generally other people who take the fall for her.

Izzy also has an older brother, David, in an odd relationship with a lawyer named Maggie.

And finally, there’s Detective Henry Stone, one of SFPD’s finest, and someone who has been tormented by the Spellman family for long enough that he now is treated like family.

This is the world, the reader is brought into. There are, of course, some crimes to be investigated, but the real story is the dynamics of the family and their friends. The dialog is quick and the conversations odd, but in a funny, endearing way.

There’s an obvious comparison between this series and the Stephanie Plum series by Janet Evanovich. If you liked Janet Evanovich, you’ll like this West-Coast version. Unlike the Stephanie Plum series, these characters grow up from book to book. Things happen, and they affect the characters. There are some poignant moments that actually show character’s changing. That’s a nice touch for a book that is a perfect airplane or beach read.

These books won’t be mistaken for literary fiction. They’re lite and easy to read. If you want something easy to pick up and hard to put down, give this series a try.

← Book Review: High Fidelity by Nick Hornby
Fear, Aging and Their Impact on My Writing →

One Comment on “Book Review: The Spellmans Strike Again by Lisa Lutz”