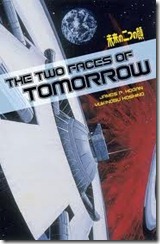 Back in December of 2011, a commenter recommended I try The Two Faces Of Tomorrow by James P. Hogan and Yukinobu Hoshino. I added it to my Secret Santa list for the family, and lo-and-behold, it appeared under the tree on Christmas morn.

Now, let me just say, that I had never heard of this book before that commenter recommended it, and honestly, I didn’t even look at any details about the book when I added it to my list. I just sort of “threw it on there” and never really figured anyone would get it for me. But my brother-in-law drew my name for Christmas, and he is—and I’m sure he won’t mind me saying this—a full-on geek. So I shouldn’t have been surprised when I opened his present, that it would be unusual.

What I didn’t know, was that this was a graphic novel. Yes, I know that I sound like an idiot, but I honestly didn’t know anything about this book beyond the note in the comment.

And now let me follow that admission, by admitting to something even more outrageous. I’ve never read a graphic novel before. The only comic books I’ve read in the last 30 years are the ones my son gets from the library. I’ve just never been into comic books. I can’t say why. The reality is, I’ve never really considered reading them.

So with that said, I was in a bit of a state of shock when I opened this and saw all the artwork. And I shied away from reading it for a while as well, because I thought I wouldn’t enjoy it. I mean, I’m a writer. I write words. I like words. I’m a horrible artist. Absolutely god-awful. How could I truly enjoy and appreciate something that I don’t know anything about?

The Two Faces of Tomorrow presents, in graphic novel form, a story about a space station put together in the not too distant future, to evaluate a very advanced computer system that needs to be isolated from Earth’s massive networks. Humans believe they will be able to study this system in isolation. But they may not be the only ones doing the studying.

So first, as a story, the idea is great, and would make one hell of a movie plot. The writing itself, well, I have a very hard time evaluating that, because this isn’t just a  different genre, it’s truly a different medium, and it wouldn’t be fair to compare this to any other novel I’ve ever read. If I have any complaints with the writing, it’s that the characters are very cliché—cardboard cutouts of the rich, brilliant scientist, the well-endowed female psychologist, the gruff military general, and the rough-and-ready cowboy/EVA driver. But with so few words, it’s hard to truly build detailed characters and motives. Perhaps cardboard is needed in this medium.

From an artistic perspective, I’m amazed at the detail in each frame of the story. The book is done in black and white, which shows detail incredibly well. What I struggled with, was trying to figure out what was going on in the frames with no dialogue. I think, with more exposure to this medium, I would begin to recognize the standard symbolism used in each frame in a graphic novel, and understand how each frame helps to build the story without words. Without that practiced eye, I was able to enjoy the complexity of the work, but not its impact on the story quite as much.

I truly do respect the amount of work that must have gone into building a novel of this sort. It’s 570, exquisitely-drawn, pages long. I can’t imagine how long that would take to put together. Reading this was definitely a different kind of experience—one that I do appreciate. But I can’t comment on whether not, within the realm of graphic novels, how this novel compares to others. If you’ve never read a graphic novel before, this probably a good one to read.

Will I read a lot more graphic novels? Right now, probably not. It’s just not something I grew up with, and don’t have a strong affinity for. Would I turn one down if someone gave me another? No. It’s a diversion from what I normally read and write, and sometimes a diversion can really be inspirational.

One Comment on “Book Review: The Two Faces of Tomorrow by James P. Hogan and Yukinobu Hoshino”