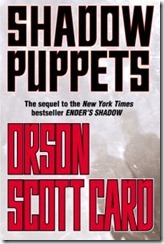 One of my all time favorite books is Ender’s Game by Orson Scott Card.  He also wrote one of my least favorite books, Empire.  Shadow Puppets falls somewhere in between, though slides more towards the Empire class than Ender’s Game.

Card followed up the Ender storyline with a whole series of books about the hero, Ender, and then another series about one of Ender’s Jeesh, Bean.  This ‘Shadow’ series includes two books prior to Shadow Puppets called Ender’s Shadow and Shadows of the Hegemon.  Ender’s Shadow was wonderful and Shadows of the Hegemon, as I recall, was pretty good.

But in Shadow Puppets, the story hits a lull, and I came away little frustrated, because, through the first 80% of the book, nothing happens.  My wife says that it gets better in the next book, Shadow of the Giant, but Shadow Puppets was pretty boring, and makes me nervous about picking up anything else in the series.

I’m sure this book sets up future conflicts in the series.  But it suffers the problems of putting people who are so brilliant (as these kids are), in a story that lasts so long that it requires them to do dumb things in order for the plot to have conflict.  In constructing an arc where everyone is always making spectacular maneuvers, the simple things they fail to see, their personal blind spots, their character traits that allow them to fail, are almost ridiculous.  It’s the opposite of Deux ex Machina, where something incredible and out of the blue has to happen to save them.  Something ridiculous has to happen to put them into jeopardy.

Because of my reading OCD, I will undoubtedly read the next book in the series.  But had this book been my introduction to the series, even I would have had a tough time finishing it.  By all means, read Ender’s Game and Ender’s Shadow.  Just be ready for a bit of a slog when you get past those two.